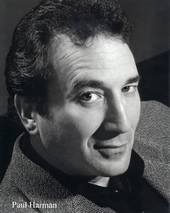 Paul Harman was in the original Broadway companies of LES MISERABLES, and CHESS, as well as IT’S SO NICE TO BE CIVILIZED, WHAT’S WRONG WITH THIS PICTURE, THE APPLE DOESN’T FALL…, and TRIUMPH OF LOVE. He has appeared in over a dozen productions on Broadway over all, including RAGTIME, THE PHANTOM OF THE OPERA, and in the recent revivals of CANDIDE, and JOSEPH AND THE AMAZING TECHNICOLOR DREAMCOAT. In National Touring companies, Paul played “Niko” to Anthony Quinn’s ZORBA, and he is the only person to perform as both “Che” and “Peron” in EVITA. Off-Broadway he has performed at The York Theater, the 92nd Street “Y,” Circle in the Square (Downtown), AMAS Repertory, and The Lambs Theater among others. Paul has worked in regional theaters in Palo Alto, Buffalo, Milwaukee, Saint Louis, Philadelphia, Cleveland, and Miami, to name a few. He has performed all over Norway with The Bergen Opera, where he is known as a “topp solister” after his performances as “Anatoly” in CHESS. Paul has also had the great pleasure of singing at Carnegie Hall in “CHESS In Concert,” and “SONDHEIM: A Celebration at Carnegie Hall.” He can be heard on the cast albums of “Les Miz,” “Chess,” “SONDHEIM; A Celebration,” the York Theater Production of “Merrily,” and the most recent recording of CANDIDE. He was heard, for many years, humming the theme to Masterpiece Theater on PBS. The most eagle-eyed fans will have seen him several times on “One Life to Live,” “All My Children,” and most recently on each of NBC’s three ‘Law and Order’ shows. As a teacher, Paul has toured nationally, lecturing on “The Business of Acting” to university drama departments since the early 1980’s, and coached privately for years. After studying many times with the late David Craig, Paul has synthesized Mr. Craig’s system with his own experience after 35 years of auditioning to design this current curriculum.